I am not so young anymore.  I lug around lots of memory stuff … flashbacks I mostly keep to myself because … because they’re only important to me.

But sometimes I see something  … or hear something … and I have an ”if only I knew then, what I know now” moment. So I speak up.

This testing-time flicks my switch.  I know education … and I know children.  I have an endless reverence for childhood … and a softness for kids.  So … hear me out.

As a boy-child, I learned an important lesson from my stiff father about growing old.  That living to 70 was not much of a feat … because it only amounts to 840 months. And that isn’t a lot of time … not in anyone’s book.

That long-ago lesson taught me to be very careful with numbers … and to respect time. And not waste time … or let others waste my time.

So, from this old father to you young fathers and young mothers … during this testing time … mind time … and unhurry your child.

Mind those sweet moments with your children and seldom say “Hurry up!”. Don’t wish for anything except this moment. Leave tomorrow alone.

Tend to today. Because those tomorrows become yesteryears in a flash.

Don’t let anyone hurry your child.

Don’t let anyone sandpaper their softest years with “grit” or”rigor” or “college ready” … because there’s plenty of that stuff in the eight hundred months ahead.

Don’t let anyone run innocence out of your child’s life … or let others spin those clock hands faster than they already spin.

Mind the numbers in your life as never before … and pay as much attention to the little moments as you do the big moments.

Remind yourself that a five-year-old is sixty months on this planet. Less than 2,000 days old. They’re still brand new people! No one has the right to whisper anything about college or careers to a child determined to conquer the monkey bars.

And respect the Law of the Chair … if a child’s legs do not reach the floor … well … they are reality-exempt. Allowed to live in sweet clouds … and adults are to leave ’em be.

That eight-year-old… the one who sleeps in his Little League uniform? He’s a third grader. 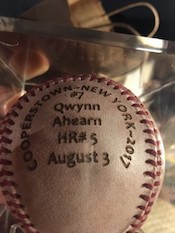 Not yet 100 months old. Let that sink in. Why is he rip-roaring mad at himself over some junk-test?

That’s not the worry of an 8-year-old. He should be anxious about base hits … not baseline scores.

His only career thought is what professional team to sign with … and that’s heavy enough. That music-blasting “tween” is maybe 150 months old.

At that age their job is to not walk into door jambs … and to try to put a lid on some hormone havoc. They’re still closer to babyhood than adulthood. Why do we let schools bum-rush them into anxiety-hell over tests? Mother Nature has already over-supplied them with all the anxiety they can barely handle. Why don’t we just lay off ‘em … and let ‘em outgrow this messy moment? It’s bad enough as it is … leave it alone.

I’m glad my father cured me of becoming number-numb.

Maybe this will shake up your consciousness … and slow you down some. And maybe … maybe you won’t say “Hurry up!” quite so often. And perhaps you’ll remind that school to slow down … that there are children on board … and they are entitled to every last drop of innocence.

Don’t let them tug your child into their warped world.

If they think education is all about numbers, well, they’ve already forfeited their privilege to enjoy your child.

Be in command of your child.  Teach them to mind time.

4 thoughts on “Unhurry Your Child”