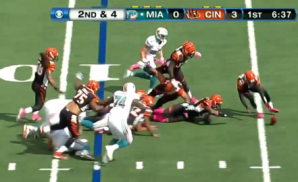 Unlike news conferences on education, which draw sparse crowds, representatives from hundreds of newspapers, television and radio networks, and ESPN, ESPN 2, ESPN for Kids and ESPN Tales from the Crypt were in attendance.

Mr. Duncan spoke first. “We are pleased to announce a partnership involving the U. S. Department of Education and the NFL,” he explained. “We will call this new effort to improve pro football ‘Race to the End Zone.’ All the leading school reform experts insist this approach will dramatically improve the quality of football play.”

“Frankly,” Commissioner Goodell admitted, “this joint effort developed out of a concern for failing NFL franchises. We have watched the brilliant successes wrought by Mr. Duncan and others like him in recent years and believe it is time to adopt a variety of sports reforms, similar to school reforms, and introduce them in our league. We believe with such changes in place the Cleveland Browns can finally reach the Super Bowl and win.”

“We in the NFL love the Common Core Curriculum that Mr. Duncan is pushing on schools here in D. C. and in forty-five states,” Goodell continued. “Just as he believes Common Core Curriculum can save the schools, we believe a Common Core Playbook will save our struggling teams. Beginning with the 2013 season every coach and every team will use the same playbook.”

A collective gasp went up from the audience. “Does Bill Belichick know about this?” a reporter from ABC wondered.

An MSNBC reporter shouted from the fifth row: “Do you truly believe if all teams run the same plays they’ll all have the same success?”

“Of course,” Mr. Duncan interjected. “It’s going to work in education, too. I promise. And I went to Harvard. So you have to listen to me.”

“Yes, well, Mr. Duncan never taught school, either,” Goodell offered in lame defense. “And look at the fantastic job he’s doing fixing U. S. schools. Only $4.35 billion spent on ‘Race to the Top’ and scores on standardized tests are soaring.”

At this point, reporters could be seen shooting each other strange looks. Frankly, none of them paid the slightest attention to stories about American education. So, for all they knew, Goodell might be telling the truth.

“We believe with this system in place every player can succeed,” the Commissioner added. “By 2020 we believe every player in the league will be proficient in blocking, tackling and pass catching.”

“Are you saying that a new playbook—nothing more than diagrams on paper—will magically change the game?” a representative of local television station WJLA wanted to know.

“From now on every quarterback will be calling the same plays,” Goodell replied. “In other words, all of them will play like Tom Brady and Peyton Manning.

“Even Mark Sanchez?” asked a dubious correspondent from the New York Post.

“That’s the beauty of the Common Core Playbook,” Duncan explained. “We draw up new standards—kind of like we said we would do under No Child Left Behind—but this time the standards really work, because I promise they will. After all, I’m really smart. Did I mention that I went to Harvard? See: all the running backs run the same plays and all succeed the same way, because the coaches don’t try to design their own schemes.”

“Naturally, all defenses will be set up in the same way,” the Commissioner added.

A young lady standing in the back of the auditorium raised a hand. The Secretary called on her to state her question.

“I’m sorry. I’m not a sports person. I’m just a third grade teacher visiting the capitol on vacation. Are you saying that if all coaches follow the same plays and all players follow the same offensive and defensive plans this will guarantee success for every player and every team?”

“Yes…” Duncan began; but the teacher had more to say.

“Wouldn’t it be wiser to let the coaches design their plays? Aren’t coaches skilled in their field and doesn’t knowledge gathered over many years in the game count for anything? Don’t players have different strengths and weaknesses, so that coaches must tailor plans to meet their needs? Don’t players, themselves, have a dramatic impact on their own success or failure during the games and the success of their teams? No  playbook in the world would have saved Aaron Hernandez if he was truly intent on committing murder this past week. And I’ve heard Peyton Manning studies more game film than anyone else…”

By now, Duncan was shifting nervously from foot to foot at the podium where he stood. “Did I mention I went to Harvard? I think we experts can fix the NFL, just like we’re fixing the schools! Pretty soon, we’ll be like Finland, whose students rank #1 in reading and math whenever international competitions are held. Just listen to me and all the other school reformers. By the way, I went to Harvard, in case you’ve forgotten.”

“I don’t think that guy knows s$%# about football,” a sportscaster from Chicago could be heard telling the teacher.

“I don’t think he knows anything about education, either,” she nodded glumly. Unlike school reformers she had learned about helping students by actually helping students for many years. She already knew what worked in a classroom and understood that writing a bunch of standards had almost nothing to do with real success.

(Standards in education, she realized, were like diet advice. Losing weight boiled down to motivation in the end.)

She tried one last question: “Mr. Duncan, I know experts say Finland’s scores are high because they have better teachers. Do you think we should copy their system in other ways? For example, their schools have no sports teams and focus entirely on academics. Might we copy them in that respect? Might we do away with organized sports in our schools?”

At that point pandemonium ensued, with shouting ESPN reporters and fainting sports columnists, and Godell looking aghast. A Fox Sports correspondent jumped on stage and tried to wrestle the microphone away before Secretary Duncan could posit an answer. No one in the audience could even fathom the idea.

The teacher smiled at the irony and exited from the room.

Here’s how Common Core Playbook will work: All teams will use identical plays.
Coaches’ and players’ strengths and weakness will no longer be paramount.
Written standards of play are clearly the key—just as it now is in U. S. education.
It’s not “how you play the game.”
It’s a bureaucrat’s dream of how you play the game.

P. S. John Curry has wisely noted that under this plan all referees will be replaced by young Referee for America candidates, who had a crash course in rules that lasted five weeks., a program modeled on the fabled Teach for America plan.

This satire was re-posted here with permission by the author, John J. Viall, and was originally posted on his blog, A Teacher on Teaching at http://ateacheronteaching.blogspot.com/2013/07/nfl-adopts-common-core-playbook-copying.html.