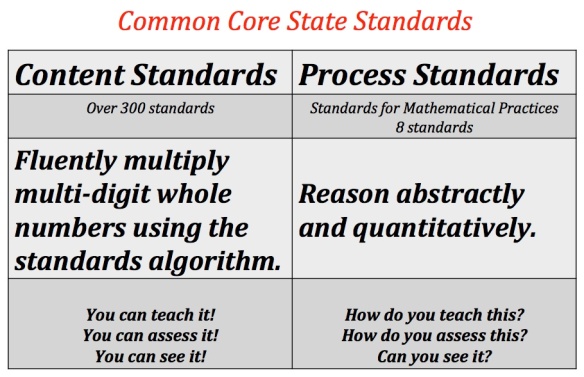 This table comes from slide 43 of a presentation at the Washington State School Directors Association conference in Nov. 2011. There are over 300 content standards in K-8. This above table presents one content standard and one of the Standards for Mathematical Practices.

Here are the eight Standards for Mathematical Practice.

The US Coalition for World Class Math provided Comments on the Common Core Standards for Mathematics June 2010 K-12 Final. The introduction to those comments starts off:

The Common Core State Standards lead off with Standards for Mathematical Practice.

The introduction to the Standards reads:

The standards for mathematical practice rest on important “processes and proficiencies” with longstanding importance in mathematics education. The first of these are the NCTM process standards of problem solving, reasoning and proof, communication, representation, and connections. The second are the strands of mathematical proficiency specified in the National Research Council’s report Adding It Up: adaptive reasoning, strategic competence, conceptual understanding (comprehension of mathematical concepts, operations and relations), procedural fluency (skill in carrying out procedures flexibly, accurately, efficiently and appropriately), and productive disposition (habitual inclination to see mathematics as sensible, useful, and worthwhile, coupled with a belief in diligence and one’s own efficacy).

To the casual observer, these words sound reassuring. For

Possibly a little too esoteric but the concerns expressed regarding these standards manifesting in more student-centered, inquiry based approach to math are being realized.

Let’s take a close look at one of the SMP.

SMP 6. . Attend to precision.This sounds like they are calling for computational accuracy. One needs to look further and detect the nuance of emphasis in the narrative that gives more information about the meaning of this standard. Here is that narrative:

Mathematically proficient students try to communicate precisely to others. They try to use clear definitions in discussion with others and in their own reasoning. They state the meaning of the symbols they choose, including using the equal sign consistently and appropriately. They are careful about specifying units of measure, and labeling axes to clarify the correspondence with quantities in a problem. They calculate accurately and efficiently, express numerical answers with a degree of precision appropriate for the problem context. In the elementary grades, students give carefully formulated explanations to each other. By the time they reach high school they have learned to examine claims and make explicit use of definitions. (bold and color added for emphasis) 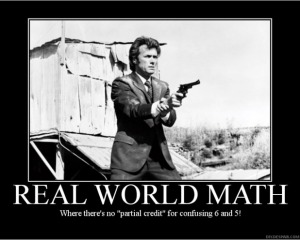 other state standards influenced by the NCTM standards. This looks much the same, just a tad more sophisticated. Hey, it sure does sound great though. I’ll take a dozen… oh, there are only 8… that’s okay, I’ll still take a dozen.

Write or Wrong?
The focus on communication in the SMP may, in part, be the source or justification for the emphasis in asking students to explain the process they use. The ability to explain may be given greater importance than getting the right answer. For many math problems, the work students show should be explanation enough and is a great indicator of understanding. There has been a shift in math it seems. Answers to straight-forward math problems used to be either right or wrong based on their being a correct answer to the problem. That no longer seems to be the case and an answer is deemed to be right if a group of students reach consensus about it.
[youtube=http://www.youtube.com/watch?v=DW0VxxoCrNo&w=560&h=315]

Publishers of poor math textbooks/programs, professional development programs, and the SMARTER Balanced Assessment Consortium are emphasizing the Standards for Mathematical Practices (SMP) rather than the content standards. This emphasis on the SMP will influence local school district math textbook adoptions. The misguided but deliberate emphasis on the SMP rather than the content standards simply renders the CCSS as set of complex standards akin to the NCTM standards. The SMP flew in under the radar and few people were concerned about them. This emphasis will not serve the students across the country well.

The emphasis placed on the Standards for Mathematical Practice supports a constructivist approach. This approach is typical of “reform” math programs to which many parents across the country object. Programs like Investigations and Everyday Math are able to claim they address the CCSS SMP. Publishers of reform programs are aligning their programs with the CCSS Standards for Mathematical Practice. The adoption and implementation of the CCSS will not necessarily improve the math programs being used in many schools.

Many math professional development programs for school administrators and teachers are focusing on the SMP. What is taking place in your local school district?

A couple of years ago I attended a meeting of math teachers at a middle school. None of the teachers had yet heard of the Common Core State Standards. The school principal was in attendance and was excited to share information about a seminar he attended the previous week. This principal distributed a one-sheet handout with the eight Standards for Mathematical Practice to the math teachers. He told the math teachers that these were the Common Core State Standards for Mathematics and this is what the school and the district will begin to focus on for math instruction. He gave no mention or indication of any awareness of content standards. These Standards for Mathematical Practice are what the school leadership has been told are the math standards and it is what leadership is telling teachers. Furthermore, administrators will evaluate teachers’ ability to deliver instruction on the SMP. Are the administrators in your local schools receiving similar training?

For those who find the CCSS math content standards to their liking, and possibly an improvement over their old or current state math standards, I urge you and everyone else to beware of the deliberate emphasis on the Standards for Mathematical Practice.

Here are links to a couple of articles related to the emphasis on the SMP.

Here are hotlinks to:

Common Core State Standards for Mathematics:  Does it Add Up or Down?  Part 1

Common Core State Standards for Mathematics:  Does it Add Up or Down?  Part 2

"The more any quantitative social indicator is used for social decision-making, the more subject it will be to corruption pressures and the more apt it will be to distort and corrupt the social processes it is intended to monitor."