You are encouraged to actually look at the Common Core State Standards for Mathematics document.  Become familiar with the document and learn to use your pdf reader search function to find what you are looking for.  Check information out for yourself.

Many general concerns about the Common Core State Standards for Mathematics are well expressed on a number of different websites.  The Where’s the Math? webpage on the CCSS lays out many concerns people have about the standards.  Rather than presenting those concerns again, you are encouraged to explore that webpage and follow some of the links provided to learn about many more specific concerns people have expressed.

Here are graphic depictions of the standard algorithm for each of the operations of addition, subtraction, multiplication, and division. 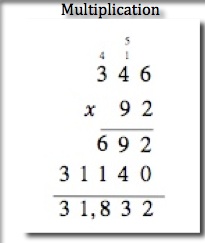 What do strategies based on place value look like?  Here are a couple of videos that do a better job showing some of these strategies than I could do explaining them.  I encourage you to take the time to watch both videos.  Even though both videos were made prior to the CCSS. They show the type of strategies the CCSS encourage and publishers are including in their CCSS aligned programs.
[youtube http://www.youtube.com/watch?v=1YLlX61o8fg]
[youtube http://www.youtube.com/watch?v=Tr1qee-bTZI]

2.OA.2. Fluently add and subtract within 20 using mental strategies.2  By end of Grade 2, know from memory all sums of two one-digit numbers.

3.OA.7. Fluently multiply and divide within 100, using strategies such as the relationship between multiplication and division (e.g., knowing that 8 × 5 = 40, one knows 40 ÷ 5 = 8) or properties of operations. By the end of Grade 3, know from memory all products of two one-digit numbers.

There is a real discrepancy in the manner in which the CCSS addresses area and perimeter in the third grade.  Let’s examine this.  Here’s the standard for area:

Relate area to the operations of multiplication and addition.

–Find the area of a rectangle with whole-number side lengths by tiling it, and show that the area is the same as would be found by multiplying the side lengths.

–Multiply side lengths to find areas of rectangles with whole- number side lengths in the context of solving real world and mathematical problems, and represent whole-number products as rectangular areas in mathematical reasoning.

–Use tiling to show in a concrete case that the area of a rectangle with whole-number side lengths a and b + c is the sum of a × b and a × c. Use area models to represent the distributive property in mathematical reasoning.

Recognize area as additive. Find areas of rectilinear figures by decomposing them into non-overlapping rectangles and adding the areas of the non-overlapping parts, applying this technique to solve real world problems.

Tiling?  Yes.  This does call for tiling.  Will students be assessed on their ability to find area by tiling?  If it is in the standards, it should be assessed.  Maybe the more important question is should tiling be in the standards?  How many contractors expect their

Considering the excruciating contortions and detail in the standard for area, one might expect similar treatment for perimeter.  This does not happen.  In fact, the word perimeter does not occur in the standards until this standard appears in third grade:

The concept of perimeter and its formula are never developed.  Instead, students are thrown into real world problem solving involving perimeter without any background knowledge.  The treatment of area and perimeter might be considered a bit uneven. I guess they want to make sure to cover the topic of area while going around the perimeter topic.

In fourth grade students are expected to apply the perimeter formula for rectangles in real world and mathematical problems without the concept of perimeter or its formula ever having been introduced, addressed, or developed.  I guess with enough deep conceptual thinking students will automatically know what perimeter is as well as the formula.  In fourth grade:

Apply the area and perimeter formulas for rectangles in real world and mathematical problems. For example, find the width of a rectangular room given the area of the flooring and the length, by viewing the area formula as a multiplication equation with an unknown factor.

Will the Standards Pass the Test?

The CCSS math standards are one of a kind—unique among math standard sets. I have looked at a lot of sets of math standards—most of the best ones and enough others to recognize bad ones. I have not seen any like the CCSS. I have heard it said the CCSS math standards were patterned after the Indiana math standards. If that is true, they did a terrible job. Saying the CCSS were patterned after the IN standards sounds great but I bet you the authors of the math standards could not tell you the process they used to do this patterning.  If they even attempted to articulate the process it likely would not be step by step.  Instead it would be by leaps and bounds and resemble jumping to a conclusion of such patterning with no evidence   (they already have a long established no evidence pattern).

You will find similarities among most sets of math standards. The wording of the CCSS math standards is significantly different from the top rated standards.  The CCSS are worded in such a way as to dictate pedagogy for too many of the standards in spite of proponent’s claims to the contrary. Take the tiling standard, oh, sorry, I mean the area standard presented earlier and compare it with WA’s grade 4 standard:

Determine the perimeter and area of a rectangle using formulas, and explain why the formulas work.

The CCSS standard dictates tiling while the WA standard simply says get the job done and leaves the how to do it up to the professional judgment of the teacher. By virtue of the pedagogical ideas that are inherent in them, the standards may result in the adoption of severely deficient textbooks and programs that value process over content and emphasize a student-centered and inquiry-based approach.

The verbs and how they are used in a set of standards tells a lot about the standards and helps identify the instructional intent behind them (i.e., constructivism, explicit).  The March 10, 2010 draft of the CCSS used the verb “understand” as the leading verb 27% of the time in the K-8 standards.  That was cut down to a little more than 9% in the final standards (still too much).  “Understand” can be difficult to teach and assess so the fun really escalates when you strive for deep conceptual understanding.

The Indiana, California, and Washington standards were among the top rated standards in country. They were written in such a way as to pass what I call “The Man in the Street Test”.  That is where the average man in the street would be able to read a standard and know what was meant.  The CCSS will only pass that test if the street is Pi Avenue or Pythagoras Lane and populated by mathematicians and they likely will only recognize the content and not have a clue about the embedded pedagogy.

Excuse me now while I go tile my living room walls so I can figure out how many cans of paint I need to purchase.  How am I going to keep all those tiles up there?  I only have two hands.  Rather than trying to hold all the tiles up at once maybe I will outline them one at a time on the wall and see how many it takes.  Will that count?

This part of the series, Concerns About the Math Content Standards, only considered a few concerns.  There are many other concerns that were not addressed here.  Part 3 of this series will provide some information about the Standards for Mathematical Practice.

Even grocery store employees have to express their answers in more than one way.